In just a few weeks, we’ll be celebrating Thanksgiving, and many people increase their focus on gratitude all month long. What are you grateful for? There are lots of everyday things in our lives we take for granted that our ancestors didn’t have (and some people still don’t). Clean, running water, piped straight into your house is a great example.

There is archeological evidence early humans began using fires as a practical tool as much as 1.5 million years ago. Later, they figured out a way to bring the fire inside their dwellings by creating a fire under a central roof opening to let the smoke out. But an open fire only warms us about 20% efficiently. Most of the heat literally goes up in smoke! So, people were still pretty chilly in the colder climates.

Later central heating systems were developed, including stoves, fireplaces, hearths, and systems under the floors. The earliest central hearths date back to Greece around 2500 B.C.E. As early as the 800s A.D., people were using crude fireplaces, which didn’t become commonplace in Europe until the 13th century. The castles built around that time had fireplaces made completely out of stone, with a short flue to let the smoke out. As technology improved, they used cast iron in these fireplaces to protect the stone from the fire.

invented a fireplace in which air was pulled through the back and bottom of the fireplace and circulated the warm air out into the room.

Underfloor heating systems were the original systems for radiant heat, which is the type of heat you feel when the sun’s rays hit your face or when you can feel the warmth of the oven across the room. The air itself isn’t being heated. Hot objects are radiating their heat out. 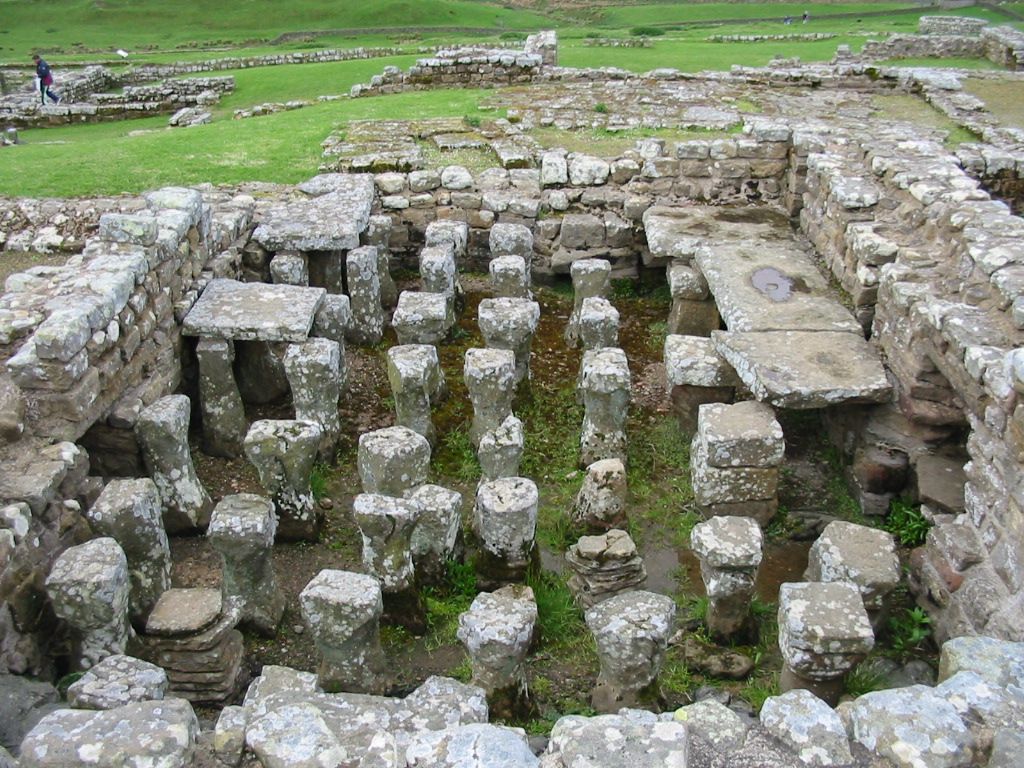 The first example of radiant floor heat was installed in a palace in Turkey in roughly 1300 B.C.E. By about 80 B.C.E. the Romans had mastered the underfloor heating system and later designed the systems to heat the walls, as well. Initially, they operated by placing a fire at one end of a chamber, called a hypocaust under a stone floor, but later they designed separate furnace chambers that were placed outside. Scientists tested the efficiency of the Roman’s systems at the Constantinian Baths, which are well-preserved. The test showed that the hall of could be heated to 77 to 95 degrees and worked at roughly 90% efficiency! However, as you can imagine, it took a lot of hard work to keep it going. Three hundred pounds of wood an hour were required to keep it warm, and it took two days to preheat the system!

Another important innovation was the invention of the chimney in the 1100s. It’s believed the idea derived from the Normans, who replaced central roof vents with flues on a sidewall, placed at an upward angle. When the chimney was finally invented, they were very large because the only way to clean them was to send a chimney sweep inside of it!

exhibited in 1686 at the annual Foire Saint-Germain, Paris.  Dalesme’s stove could burn wood, incense, and coal, yet produced very little smoke or smell. His invention showed that fires could be used inside a room, without filling the house with smoke.

In 1741, Benjamin Franklin invented a metal-lined fireplace intended to create more heat but less smoke than an ordinary open fireplace. The Franklin Stove was also known as a “circulating stove” or the “Pennsylvania fireplace.”

Through the 1800s, stoves continued to improve, and cast-iron stove manufacturing was a large and well-established industry by the time of the Civil War, particularly in the Northeast. Thousands of different designs were being built by dozens of U.S. manufacturers, and some stoves were designed to be decorative, as well as functional.

Heating with warm air may have been around since about the year 200, as the Roman Emperor Heliogabalus was said to have had a palace warmed by air. A stove was placed in a brick chamber under the rooms. Outside air was ducted into the chamber under the stove, the heated air then flowing through openings into the rooms above. The first good records of a warm-air system date to the 1200s, when, for example, records indicate that the city hall in Luneberg, Germany had a central warm-air system using three furnaces.

The Industrial Revolution brought more advanced warm-air systems with two major innovations occurring in England and in France. In the early 1800s, Englishman William Strutt invented a warm-air furnace that consisted of a riveted, wrought iron air chamber encased in brick. At about the same time, firetube hot air furnaces, called “caloriferes,” were invented in France. But it wasn’t until Professor Dr. Paul Meissner of the Vienna Polytechnical Institute published a book on heating with hot air in 1821 that we really began to understand the laws of warm-air heating. He’s credited with realizing a means needed to be made to draw off cool air as warm air is admitted to a room. His principles underlie all modern warm-air heating systems.

In the U.S., it’s believed the Massachusetts Medical College in 1816 was the first building to be warm-air heated. Around 1837, Richardson & Boynton Co. became the U.S. first mass marketer of furnaces, and the company survived for over 100 years! Between 1866 and 1900, the furnace industry grew, as furnaces were considered to be easy to operate and safer than steam heating systems, which could explode!

And speaking of steam heating, the idea for it was first put forth by William Cook in 1745 in England. Steam heating was used in England to heat mills and factories, but it failed to catch on elsewhere in Europe. However, in the U.S., many steam heating systems sprung up in the 1810s, particularly in factories in New England. Prior to 1854, when Stephen Gold, was granted a U.S. patent for a less complicated and safer design for household use, steam systems were considered to be unsafe for use in homes. After the Civil War, steam heating – like warm air heating – was growing industry, with a number of companies manufacturing boilers and radiators of various designs.

There were other types of heating systems being concurrently developed as the hot air and steam systems were becoming popular. Hydronic (hot water) and forced hot air systems (the use of fans and blowers) were among the other options available for heating in both industry and personal homes. Also, more elaborate and efficient boilers, registers, and radiators were invented, primarily for industrial purposes. But the next major heating milestone that took place wasn’t about the source of the heat, but the regulation of it.

Once heating systems became affordable and widespread in the late 19th century, a demand was created for a means to control these systems. Until this time, control of the heat had been done manually by adjusting valves, dampers, or other parts of the system itself.

The very first thermostat was invented in England but didn’t catch on. In the U.S., a Wisconsin professor named Warren Johnson invented a device that would automatically notify the janitor to adjust steam valves in the basement where the system operated. He later patented a thermostat that used compressed air to operate the steam valves directly in 1885 and founded the Johnson Electric Service Co. to manufactu 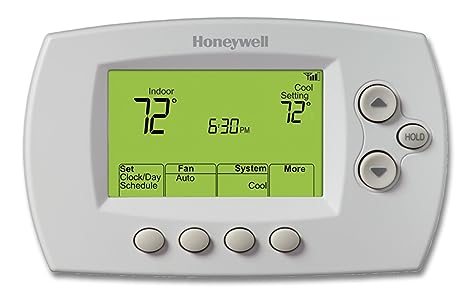 re and install his invention. That company still exists today as Johnson Controls!

In 1886, Albert Butz, a partner a fire extinguisher company, patented a draft damper that was controlled by a thermostat-controlled draft damper. His company, Butz Thermoelectric Regulator Company, didn’t see a lot of sales initially, but after World War I, his company merged with the company that eventually became Honeywell Inc.

Prior to WW I, most homes were heated by hand-fired coal furnaces, which had to be fueled and cleaned manually, so maintaining a comfortable temperature throughout the day and night was challenging and inefficient. The coal shortage the U.S. experienced as a result of the war led to government efforts to conserve energy, but also led to increased interest in heating with oil and gas.

The first residential oil burning system was invented by in the early 1900s by Milton Fessler, and by the 1920s, the demand for oil burners had exploded. Honeywell developed the first controls for these oil burners in 1924. Gas heating also advanced in the U.S., beginning in about 1840, as gas companies looked for a way to sell more gas once the electric industry began advancing and gas was no longer needed for lighting. However, gas equipment didn’t really take hold until the thermostats were developed to regulate the systems, around the time of World War I.

It wasn’t until the mid-1920s, that heating became affordable, reliable, and efficient enough to be commonplace in our households. Finally, families could regulate their indoor environment by simply adjusting the thermostat, rather than having to run to the basement to manually adjust the heat at the source!

Since then, innovations in our industry have grown by leaps and bounds. Our heating options have become even more affordable and effective, and major strides in energy conservation have transpired. Not to mention how the digital age has impacted our industry with the innovation of programmable and smart thermostats which virtually eliminate the need to even adjust the thermostat to enjoy our indoor environment!

If you had been taking your furnace for granted, we bet you now have a new appreciation for your cozy, warm house. Aren’t you grateful for warmth that doesn’t require chopping wood or shoveling coal and ash?